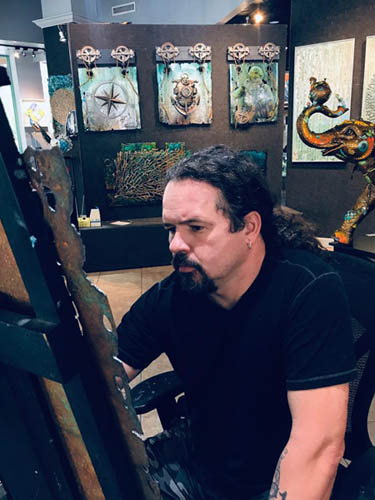 “I create art not just for my clients, but for myself as well. It is an extension of me that is limitless. The excitement to display and the ability to share with the people makes creating art an amazingly rewarding experience.”

From the suburbs of Rio de Janeiro in Brazil, Krystiano DaCosta emerged a unique artist with an urgency to learn and create. His Italian heritage and strong desire to explore new horizons drove him to move to Italy in her early 20’s in order to refine his artistic skills.

Later, Krystiano moved to the United States where he became a Walt Disney World scenic artist. Fortunate to work alongside many talented artists from around the world, he learned an impressive skill set of techniques which has aided him in developing his own style.

Kystiano has become a revolutionary pioneer in Central Florida through inventions of his own interpretation of industrial impressionism – developing pieces of art where he combines natural elements with traditionally European textures. The result is an industrial refine furniture collection, creating intricate decorative pieces of art an innovative pieces of furniture serving the industry of Interior Design.

On his most recent work, Krystiano has been pushing the boundaries of fine art on metal. Literally born from fire, this technique took a period of years to be perfected. A chaotic collision between pigmentation and direct fire on distressed metal gives a holographic effect with an incredible three dimensional look, giving each piece its own unique character.

Click on any image for enlarged view and artwork title.