An accomplished gallery artist from Hawaii to London, Mackey’s painting reflects a unique style of impressionism, abstract and renaissance techniques. When you view his work up close, you will be mesmerized by the incredible textures and color blending rarely seen in the art world today.

Mackey’s painting Pineapple Express was recently chosen by Radiance Winery, to be the label of their Hanalei wine, which will be released in 2021. (continue reading his bio below)

Browse Shawn Mackey’s Artworks for Sale at Ocean Blue Galleries.
The gallery features samples of his artworks which are always selling fast.
Use our convenient contact form to inquire about specific artworks. 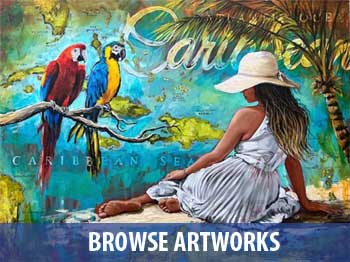 For immediate assistance please call us at…

Shawn was born in Edmonton, Canada in 1984. Growing up in the long cold winters of Canada, he had many indoor hobbies. Shawn’s favorite was drawing. His parents, who were both teachers, would bring home boxes of scrap paper for him to use. He loved drawing Italian sports cars, architectural drawings and a variety of superheroes and cartoon characters. Shawn once had his younger brother dress-up in a Batman costume to use him as a model to sketch his favorite superhero.

Shawn’s talent was apparent at a young age. When he was eight, Shawn began selling drawings of sports cars to his classmates. As his passion for drawing and painting grew, it became a distraction at school. On a few occasions Shawn received lectures from teachers for setting up a “tattoo shop” in the school bathroom. Much to the relief of parents, Shawn only used colorful markers to tattoo his classmates. After high school, Shawn put his artistic talents on hold to focus on university studies with a plan to become a lawyer. One year into the rigors of college life, filled with classes on politics and economics, essay writing and class projects, Shawn longed for a change. He had a need to fulfill the creative passion that burned inside him, so he enrolled in an art class during summer school. In the Fall, upon returning for a new school year, Shawn transferred into the university’s Fine Arts program.

He said, “I considered entering the architectural design program, but I realized that painting was where my creativity could freely flow. My goal is to tell a story and invoke a deep emotional response with my art.” During the time spent earning his Bachelor of Fine Arts degree, Shawn began developing his powerful and expressive style of painting, blending impressionism, abstract and renaissance techniques. Shawn met his wife Jenn while working at an Italian restaurant. As Shawn tells it, “My wife and I applied for work at different restaurants but, as fate would have it, we both ended up working at the same one. I worked as many hours as I could just to spend time with her.” In 2015, Shawn and Jennifer were married on a beach in the Bahamas, with a close group of family and friends.

After graduating from The University of Alberta with his BFA in 2007, Shawn decided to follow in his parent’s footsteps. He earned a Bachelor’s in Education and became an art teacher. It was during this time that Shawn had his biggest artistic growth. For ten years, he immersed himself in the work of the great Masters. From renaissance artists like DaVinci and Michelangelo to impressionists like Monet and Renoir, he studied the nuances of their style and technique. Through this decade of study, teaching, research and practice, Shawn’s technique matured into his own unique style of painting that defines him today. His artwork is composed of textures and blending of colors that make Shawn’s paintings immediately identifiable.

Today, Shawn and his lovely wife Jenn, along with their Siamese cat “Gossamer,” enjoy spending time with family and friends, while he pursues his life-long passion of painting. “When my art evokes an expression of pleasure and intrigue on a client’s face, it brings me great joy. I love to hear their comments about the feelings and memories they experience from my art, especially when sharing laughter and a glass of wine.”

Please Contact the Gallery for an Updated List or Catalog of Current available
Limited Editions & Originals,
we would love to hear from you!